Since Misha's told us GISHWHES will start on August 11th this year, should we get the ball rolling with a Find a Team meme?

So the clues for the runner up teams have started to come out.  I'm the Team Subtext lead and I'm coordinating with the Team Widdermacker and Team (sc)Avengers lead to share clues and collaborate.

So if you are on one of the following teams, drop us a line!

Last year we announced the victors on Christmas day. However, it has come to our attention that the Mayan calendar (and the world with it) ends tomorrow, so we thought it would be best to let you know who takes the cake this year in advance of the apocalypse.

But before we get into all of that, I would like to thank you all for an incredible Hunt. I was alternately moved, inspired, dumbstruck and disgusted by the thousands and thousands of submissions this year. Not only that, but this year - though it's still not official - it looks like we broke not one, but two Guinness World Records. One for doing what we do best - scavenging - and another for collecting the most charitable pledges… ever. Here's a little story someone sent us a couple of days ago which, in and of itself, made the whole thing seem worth it…Random Act of Kindness at K-Mart.

I'm also pleased to say that your Acts of Kindness videos (Item #106) were similarly bountiful, incredible and likely world-changing. In fact, Gishwhes did a clean sweep of Random Acts' Semi-Annual Awards for Random Act SAARA. Congratulations to those teams and everyone else who took the time to do and film a Random Act of kindness.

Now, for more good news - we pretty much quadrupled our contribution to Random Acts 501c3 this year. You all bought a bunch of stuff at the Shwop and were generous at registration, so we were able to donate $41,638. In sum, not only did we encourage young people the world over to skip school in order to craft dinosaurs from maxipads, we also created hundreds of random act videos, handed out thousands of coats to the homeless, presented dozens of sock puppet shows to sick children, gave hundreds of long-time couples the chance to share their wisdom about relationships, got 100,000 people to commit pledges to perpetrate acts of kindness and are collectively contributing a ton of cash to help carry out good works worldwide. So I say this was a raging success that we can all be proud of (or at least not ashamed of).

Blah, blah, blah, boring, boring, boring. You don't really want to hear about all that crap. I know what you're thinking: "Shut up Misha! Am I going to Scotland or not?!" So, without further ado, the answer is, "Yes!… If you're on team Badwolf." There were several teams that were neck and neck this year and it was an absurdly difficult call, but in the end, we were smitten with Badwolf, their creativity, antics and enthusiasm. Congratulations! I sincerely hope you do not prove to be sociopaths. For the other teams that were so close, we are going to award a Gishwheshean Honorable Mention this year. We will be sending something "Gishwhes Official" to each member of the runner up teams: Widdermacker, (Sc)Avengers, Subtext, ROBOTHEAD, QuicklyHuge, Babysharks, VaticanCameos, fandom-orgy, SuperWhoLockers, and 270WinchesterLoveswishbone.

We have one more individual coming to Scotland... chosen from the Schwag Shwop purchasers. We'll be sending out that announcement in one lucky Shwop package in the New Year.

For the rest of you: This was an excellent warm-up. If the world doesn't end tomorrow, let's endeavor to emotionally scar the entire world with Gishwhes III. See you in the summer of 2013!

Happy Holidays from your friend and tormentor,

So congrats to Team BadWolf!  Also, random fun fact, the mods of this comm were all on Team Subtext and we were runners up!  HELL YEAH!  Congrats to everyone who participated!  We are awesome.

So GISHWHES is apparently doing something for Christmas.

Misha sent out an email :) He's witty as usual. In case you haven't gotten yours yet, here's a copy! 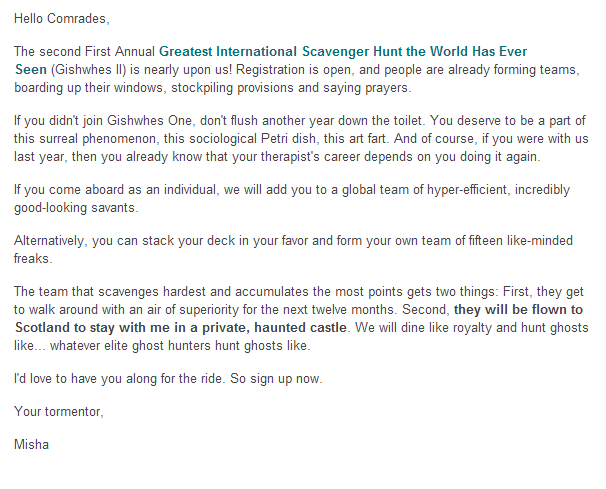 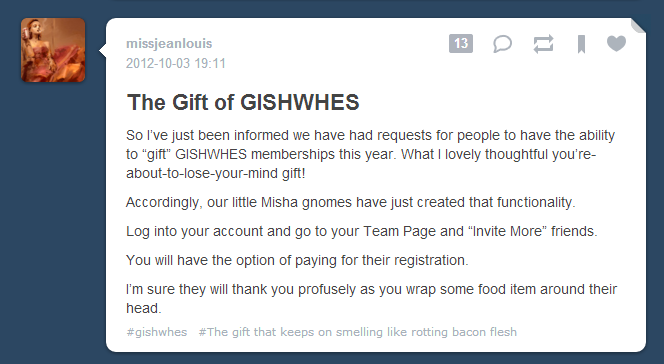 Awesome option for those of you who have friends that want to join, but can't afford it right now!

Registration for GISHWHES is NOW OPEN.

The countdown clock didn't really mean much I guess, but anyway, GO REGISTER.

The hunt begins in four weeks on October 30th.  It ends on November 4th so this is going to be a quick round this year!  Registration ends in three weeks, so be sure to get on that soon.  You can register as an individual or as a team with a one word name.   Don't forget you can find a team at our Find a Team Meme or on Tumblr.

For those of you who have difficulty deciphering countdown clocks (I'm not making fun of you, I asked several people just to be sure this was right), registration for GISHWHES opens this Wednesday at 10am PST (convert it to your time zone here).  As far as I can tell there hasn't really been a timeline of events such as how long registration is open, when the hunt starts, or how long it's going to be.  I don't know any details about how registration is going to work this year either other than we get to have 15 members to a team and we register as a one word team name.

If there's any sort of email or anything post it here because registration is like right around the corner.  I'm not sure how useful this comm is for you guys, but I try to post updates here as often as I can, but I work super long hours during the week so if any info comes out between now and Tuesday I won't really have time to post about it.

We have recieved word from the Overlord regarding the new scavenger hunt! Heres a copy of the email, in case you haven't gotten one. 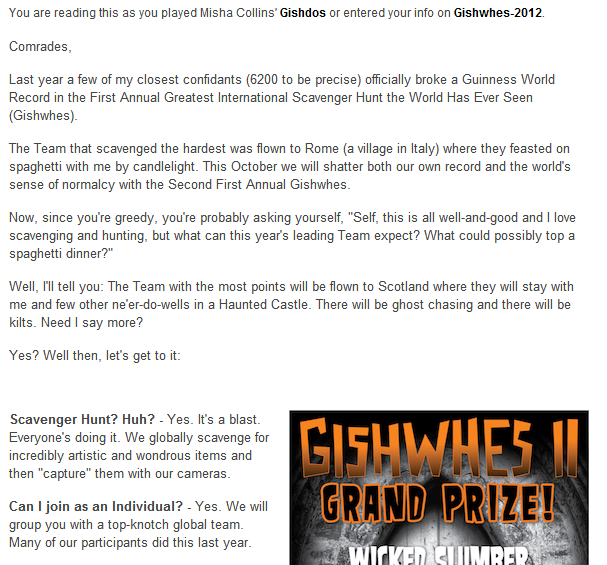 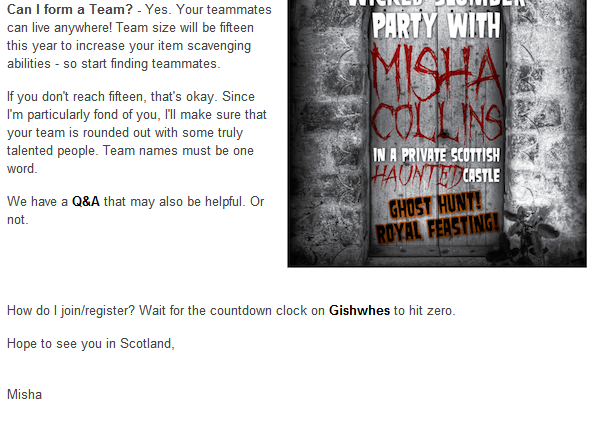 It was just brought to my attention that there are now GISHWHES wanted adds on Tumblr, so if you're still looking for some team members you might want to check out Wanted: GISHWHES in addition to the already existing Find a Team Meme.